Environmental stewardship as a dimension of a Christian stewardship ethic: views of seminary students, lecturers and ministers 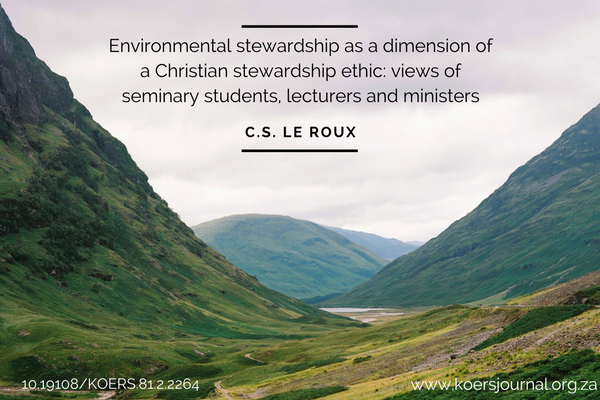 It is not uncommon to find that Christians are blamed for contributing to the destruction of the environment – a view that derives from the Biblical precept that ‘man was given dominion over the earth’ (cf Gen. 1:28). The current state of the environment indicates that humankind has indeed ravaged the earth, but it could be argued that this has occurred through greed, covetousness, materialism, competitiveness and short-sightedness which are specific human traits in conflict with God and Christianity. Furthermore, the true significance of the ‘dominion over the earth’ tenet is invariably overlooked. Having dominion over the earth means that man has the responsibility of representing God on earth; of ruling as His co-regents or, put differently, acting as His stewards or custodians of His creation. It is argued that environmental stewardship is a dimension of the Christian stewardship ethic that is inherent in the Christian faith.

Cheryl Sheila Le Roux
Cheryl S le Roux is a professor in the Department of Educational Foundations at the University of South Africa. Her research interests include Environmental Education and research methods.